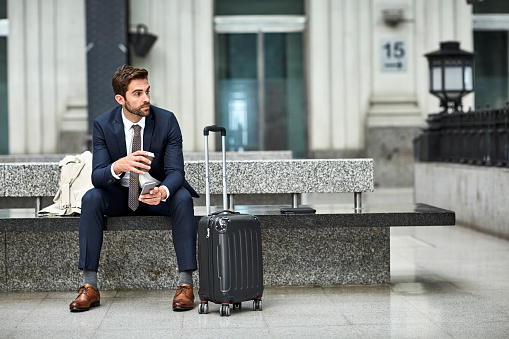 She had followed my eyes to her pocket. “The craziest thing happened,” she said. “I was trying to get out of this miserable storm when a guy walked up and ask me if I would like a warm coat. Course I said, yeah. If someone’s gonna give me a waterproof jacket, he said it was waterproof; I’m not stupid, I’ll take it. Then he gave me this card, pulling it out of the pocket she had just put it in. You wanna know about this card, don’t ya? I saw you watching me put it there. He gave me the card too, just like the coat.

Did you see there’s another coat just like mine hanging over the bench where you were sitting? Maybe that guy left you a warm coat like me. Nicest guy; real kind eyes he had. Anyway, the paper says to meet the 7:40 train, so here I am.

At this point, I don’t know what else to say, and the silence is getting awkward. “Do you happen to have the time, I queried?” “The clock seems to be off like it’s almost standing still.” “Nope, my timepiece was stolen. I was in a bad way and needing some help. I planned to go to treatment. You know, to get cleaned up. The appointment was all set, too, when this jerk I made friends with took my watch. I found out he walks the streets and pretends to be your friend until he gets your trust, then he steals from you. I should have known. He’s a real creeper who preys on the innocent. Anyway, He took my watch and stomped on it until he broke it to pieces.”