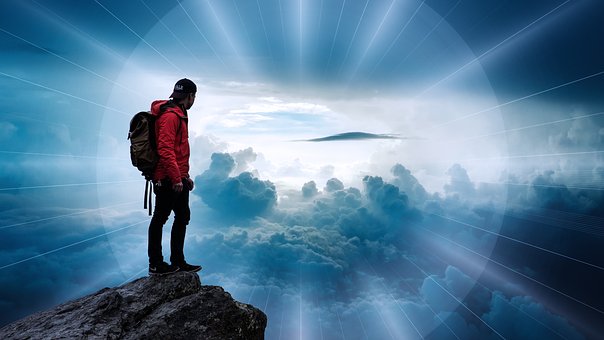 When I began blogging about the clouds, I decided I would omit one of the five messages I had received from God. I figured it wasn’t quite as meaningful as the rest. When I shared all five with the women in my study group, one of them was most impressed with the one I decided to omit. So who am I to determine which of God’s messages I should share? I understand, now, that all the words He shared are equally important. Otherwise, why would He have shared them?

A couple of months ago I was looking out the window at a clear blue sky. It was morning, and the day held promise to be beautiful and warm. I thought about how it had been a while since I had received a message in the clouds. As I looked at the open sky, I laughed and said to my heavenly Father, “It’d be pretty hard to speak through clouds that aren’t there, wouldn’t it.” I went about my business, not giving it much more thought since I didn’t know if the cloud messages were expected to continue or not. Besides, there wouldn’t be a message in a clear sky. A few minutes later, I looked out the window once more and I smiled, for there in the middle of the sky was a small cloud in the shape of an “S.”

I challenge you to consider what the “S” could represent. This one is not as difficult as perhaps some of the others. Well, now that I know what it is, it doesn’t seem so difficult.

So did you get any ideas?

So the answer is…

I could feel His presence bending close to me, whispering, “Soon…”

A cloudless day couldn’t stop Jesus from sending forth His message.

The first message was the warning of darkness swiftly covering the earth.

Some time later came the second warning (or harbinger). A great shaking was happening where we cannot rely on any other person, church, denomination, belief, or theory. Our only safety is our trust in God alone.

The third cloud message was the four tornado-shaped clouds that represent the four angels of Revelation 7:1, holding back the winds of destruction on the earth for those servants who are not yet sealed.

So now the Lord of hosts has spoken again in His mercy, to warn us that these things are not far off in the future but SOON! Yes, our God is merciful and not willing that any should perish, but that all should come to repentance. He has given these warnings so we can prepare; for along with His mercy, He is also just.

We must decide for whom we will stand and now He’s given us that chance to take that stand. How gracious and all-loving and patient He is. I don’t want to make Him wait any longer. I choose Jesus. Today.