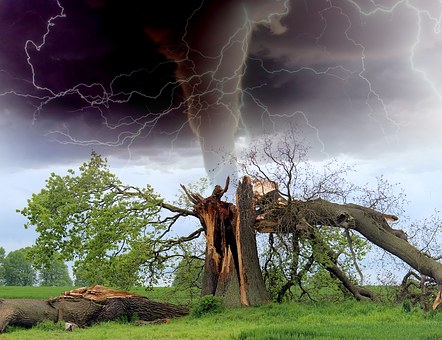 A period had passed between the second and third messages God had given me in the clouds.

As my custom was, upon waking in the morning, I let the youngest of the two dogs I house-sit for outside to do his business. It was a chilly morning as the sun rose in the eastern sky, and I was eager to get back inside to the fireplace. When I looked up, it startled me to see several cloud columns hanging in the heavens that mirrored, in shape and form, tornados. I thought to myself, “It’s a good thing I don’t live in tornado country because those funnel-shaped clouds appeared authentic.”

It was a windy morning, and my concern was the wind might have blown them away. I grabbed the bag of garbage waiting for me at the door and proceeded outside to see if the formations were yet visible. There, in the eastern sky were four pillars of clouds. Again, I asked, “What does this mean?” This time God was silent leaving me perplexed at what I was to think or do next. I busied myself with the chores of the day never forgetting the unsolved mystery in the clouds.

Close to noon, I set off in my car to do an errand, when suddenly He spoke. “The four winds of strife,” was what He said. “Of course!” I said out loud, and the book of Revelation came to mind and a time of trouble before Christ’s return.

Again, these prophetic reminders are not original, but a reiteration of what the prophets gave us.

As I look back over the four years since God spoke these messages, I see their real-time fulfillment taking place before my eyes. The third sign’s fulfillment is yet to come but approaches.

God’s love shows us what to expect. Are we prepared?

Revelation 7:1 King James Version (KJV)
7 And after these things I saw four angels standing on the four corners of the earth, holding the four winds of the earth, that the wind should not blow on the earth, nor on the sea, nor on any tree.

Daniel 12:1
And at that time shall Michael stand up, the great prince which standeth for the children of thy people: and there shall be a time of trouble, such as never was since there was a nation even to that same time: and at that time thy people shall be delivered, every one that shall be found written in the book. God’s love shows us what to expect. Are we prepared?