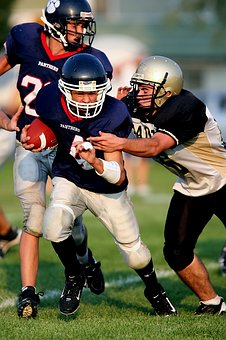 Every football player knows the immediate goal is to get to the opponent carrying the ball and bring him down. The opposing team spends every ounce of energy to make that happen. In the spiritual realm, Satan and his team of demons are bent on your takedown if you are a child of God. That thought could terrify if you keep the football. The game changer is when you hand the ball off to Jesus. The results, TOUCH DOWN!

However, what we often overlook is that the game is already over. The enemy wants you to believe it’s still going and he invites you to come out and play. Accepting the challenge puts the football in your hands where the forces of evil have the advantage. Come off the field of play and observe as it strips the opponent of his power.

Isn’t it a relief to know You don’t have to carry the football?